Created by British artist Antony Gormley, the piece, which contains 18 kilometres of wound aluminium tubing, is called New York Clearing. The structure, which resembles a giant squiggle, rises to 50 feet at its tallest point with each piece of one-inch rectangular tubing secured to others with plastic and metal zip ties. The entire collection is then fixed onto the concrete ground with steel spigots.

Located at Pier 3 overlooking the East River and facing the Manhattan skyline and Brooklyn Bridge, New York Clearing is described by its creator as “an interactive public scape.”

Gormley says that visitors to the massive tangle of aluminium tubing are encouraged to traverse through the structure by stepping over and walking under it. At their own risk, of course.

“This is an open work,” the artist recently stated.

You know, sort of like you do in the line up at the coffee shop minus the coffee, the annoying wait, the cost of the beverage and the chatter.

New York Clearing is one of many pieces that make up the global art initiative Connect, BTS which was launched by a Korean pop band and has been hosted in other cities around the world.

Who knew that a giant squiggle would get so much attention?

Wigan Little Theatre. The iconic live theatre underwent a major facelift in 1989. The stage is just 540 square feet in size, which likely explains the word ‘little’ in the facility’s name. 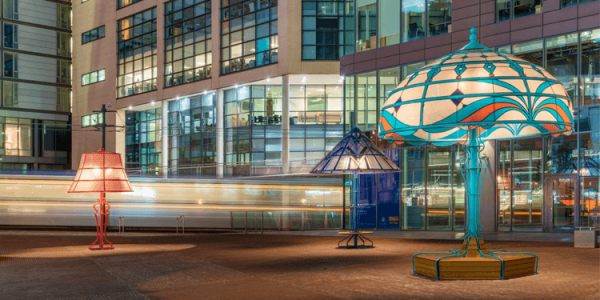 Manchester is an incredible place to be and recently, things got a little brighter in and around Piccadilly Place.

Koala Shaped Soap To Bring New Hope Lush has just released a new product that is sure to clean up – in the animal charity department, that is. Called All The Wild Things, this limited-edition bar of soap is not your ordinary bar of soap….