The Lamborghini logo, sometimes a bit of unabashed, on-the-nose bravado is all that a product calls for in order to send it into next-level of prestigious acclaim.

Lamborghini certainly occupies a singular spot within the pantheon of legendary names in luxury sports cars. Its presence is almost deified among the other names synonymous with wealth, speed, and exquisitely fine-tuned attention to detail.

And like some of its sister models, this revolutionary feat of engineering, birthed in Bologna, shares its automotive ancestry with the makers of military engines.

The production mandates of World War II overtook every industry in Italy and across the world. It left many companies with a surplus of skill and ingenuity, and by the end of the war, the freedom to fully reinvent themselves as purveyors of these new marvels.

Now selling to civilians, Ferruccio Lamborghini moved from military engineering to fulfil the practical peacetime needs of tractor producing — and then eventually tried his hand at car design. At that point, he hit upon an innovation that won the imaginations and praise of the world.

But for Ferruccio, there was no separation between himself and the product. He saw the cars he made as stand-ins for his own personality and persona. So, in searching for the right symbol to represent these high-performance masterpieces, he commissioned a logo in 1952 which, unfortunately, yielded some forgettable lacklustre results.

But he knew he was onto something with the image of the bull, and his newfound cohorts believed in him. A handful of inspired partnerships spurred the Lamborghini brand to level in 1963 with collaborations that sparked a visceral and kinetic X-factor awe. Ferruccio turned to the expertise of jet engine designer Bertone, the artist Bizzarrini, and logo maker Paolo Rambaldi. Together, the four of them would devise the look and feel of this exhilarating brand. 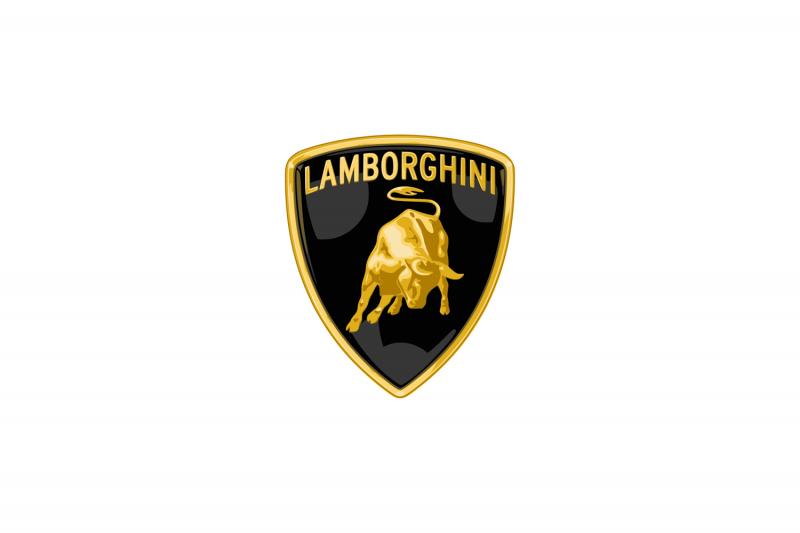 The partners embraced the bull and possibly even encouraged the logos more than subtle similarity to the Ferrari logo design. What smacks of deliberate sampling feels like neither homage or plagiarism but a challenge. Ferruccio wouldn’t shy away from publicly pitting himself against anyone he saw as his rival, so it’s no surprise the visual parallels between a strategically planned company logo enshrines the automakers’ competition with the very insignia that represents them.

Ferruccio indeed saw himself as a bull. As a zodiacal Taurus and lifelong lover of bullfights, this was the creature he wanted as an emboldened, emblematic mark of his life’s work.

Now as a brand owned and managed by Audi since 1998, the Lamborghini Logo has been slightly restyled and refitted.  The proportions of the shield, the rendering of the bull itself, the sharpness of the colours — all in an effort to keep the image, and by extension the brand, current, fresh, and as vital as ever. Still, they’ve never altered it with any drastic broad stokes or heavy-handed revisions.

Even with its dominance, marketing power, history, resources and profound global reach, Audi seems to understand that even its most carefully funded and articulated strategies likely won’t approach the zeal of four fiery Italian dudes from the last century.

Don’t Be Left Out…

Love this Lamborghini Logo post? Why not join my free email newsletter that’ll give you first access to even more great posts like this one, as well as exclusive information and even special offers?