Logo or Piece of Art?

Essentially, Tate is the umbrella organization of four prestigious museums with extremely varied offerings between them. The museums that constitute Tate pride themselves on long histories, with early beginnings that stretch all the way back to the National Gallery of British Art in 1897.

The unifying logo is the final image descending from a line of progenitors that all sought to fully express and represent the thrilling diversity of art across Britain’s gallery scene.

But uniting four major institutions that offer such differing kinds of work presented significant challenges. Even for a designer working to encapsulate all their varied specialties, the move to constitute a single logo was controversial. Some of the galleries felt protective of their individual identity and were hesitant at the prospect of lumping themselves with the others.

The Single Notion of Multiplicity

The brand’s original concept, designed by Marina Willer in 2000, began with the notion of multiplicity. Willer describes her thought process. “The way that [idea] started to translate into visuals was to think of Tate as something that is always changing, but is always Tate because ‘look again, think again’ is about how art always makes you constantly challenge yourself and see the world in a different way.”

The logo, a rendering of the word “Tate,” pixilated like a pointillist painting in a way that makes it at once blurred and distinct, is meant to move in and out of focus as a metaphor for the broad and transformative range of work Tate represents. The brand messaging reads clearly: ever-evolving but always identifiable.

The logo went through numerous drafts and alterations before arriving at the perfected version that’s currently in use today. Stephen Gilmore explains how they finally landed on the present concept: “We’ve moved from multiple logo variations to just one — simplified to work across all applications. We wanted to create one logo which was still recognizably Tate but could be used more dynamically and exist more effectively in the digital world.” 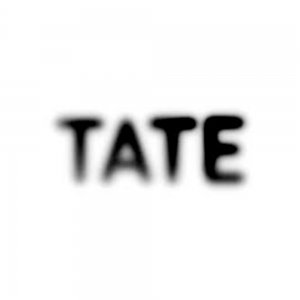 To look microscopically close at those earlier versions, one would count close to 3,000 dots. However, the new one pares the dot-count down to just 340 — a solution that unknowingly preempted the challenges of shrinking, enlarging and reproducing the logo in print; online; on billboards, signage, mailers, and brochures; and across the endless range of merchandise materials on which the logo would ultimately appear.

Now even the early naysayers of the move to unify the museums can acknowledge the effectiveness of their shared trademark and the exposure it has brought them. The logo reads beautifully wherever it appears and metaphorically reflects the abstract yet concrete, solid yet ephemeral nature of art itself.

Gold’s Gym logo. Worth Its Weight In Gold, And Then Some

The Gold’s Gym logo, which also became synonymous with Arnold Schwarzenegger in the 1975 movie Pumping Iron, is as popular today as it was back in the seventies.